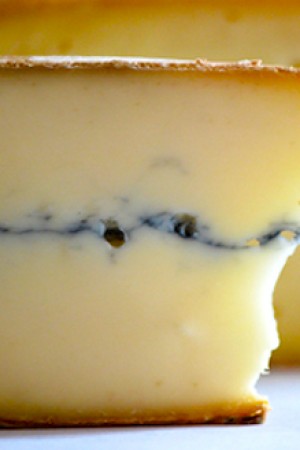 Morbier is a semi-soft cows' milk cheese of France named after the small village of Morbier in Franche-Comté. It is ivory colored, soft and slightly elastic, and is immediately recognizable by the thin layer of black vegetable ash separating it horizontally in the middle. It has a rind that is yellowish, moist, and leathery.The aroma of Morbier is strong, but the flavor is rich and creamy, with a slightly bitter aftertaste.

Traditionally, the cheese consists of a layer of morning milk and a layer of evening milk. When making Comté (cheese), cheesemakers would end the day with leftover curd that was not enough for an entire cheese. Thus, they would press the remaining evening curd into a mold, and spread ash over it to protect it overnight. The following morning, the cheese would be topped up with morning milk. Nowadays, the cheese is usually made from a single milking with the ash added for tradition.

Morbier, which is aged for at least 60 days, pleasantly confounds expectations. Contrary to its smell, Morbier has a mild taste and leaves a wonderful, nutty aftertaste. Morbier can be served on a cheese platter at the end of a meal and it can also be easily used for cooking.