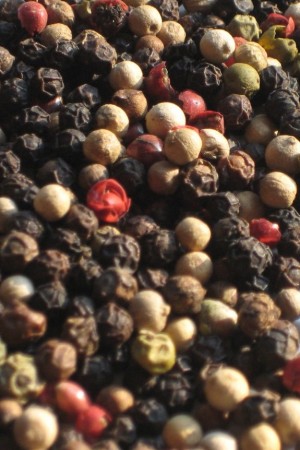 During Herbie’s visit to the south of France in the spring of 2001, he was particularly interested to find an unusual blend of peppercorns being sold in the markets in Cavaillon (just north of Marseilles).  Herbie has made his own melange of pepper blend inspired by the produce he saw.

This fragrant, lightly-spiced, tasty blend is made up of six different types of pepper. Black and white Sarawak peppercorns for the traditional aroma and heat of pepper; green, firm late-picked Indian peppercorns for their fresh taste; Chinese Szechuan pepper (fagara or prickly ash) for its tangy zing; Indonesian cubebs (tailed) pepper for their savoury juniper-like flavour and schinus pink peppercorns (from Reunion) for their sweetness and delightful appearance.

The melange of pepper blend adds a wonderful full-bodied flavour to soups and casseroles, whether a teaspoonful or two is tossed in during cooking or tied up in a muslin bag for later removal.

One of Herbie’s favourites is to crush a tablespoonful of melange of pepper in a pestle and mortar, rub it onto white or red meats with a little salt and then pan-fry, grill or barbecue the meat.

There is almost no limit to the number of ways it can be used, simply think of it as a very sophisticated and interesting pepper!

Health Benefits: In Ayurvedic practices, pepper is added to tonics for colds and coughs and may also act as an expectorant providing relief from congestion. It is considered anti-bacterial and an excellent source of antioxidants. Pepper increases the hydrochloric acid secretion in the stomach and may improve sluggish digestion in some individuals. Piperine, one of the key chemical components of black pepper, has been shown to improve cognitive function, and slow memory loss.

A Note Of Caution: Pepper can be irritating for individuals that have inflammatory bowel disorders, or irritation of the digestive lining.