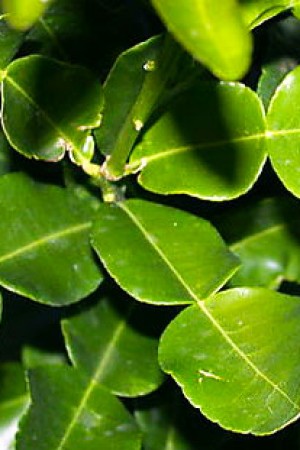 Kaffir Lime Leaves have a taste that resembles lime zest and they are most often used in Asian dishes, especially Thai.

Our Kaffir Lime Leaves have a rich green color and characteristic fresh lime leaf flavor. Australian grown; these leaves can be used fresh or dried, and can be stored frozen.

Kaffir Lime Leaves are easily recognized because of their unusual hourglass-shaped, double-leaf structure that has the appearance of one leaf joined onto another end to end.

If your recipe calls for kaffir lime leaves and you can't find any, don't substitute; the fragrance is so distinct that it is irreplaceable.

Add the whole leaves to soups such as Tom Yum and crumble them into stir-fry dishes and green curries.

Kaffir Lime Leaves are widely used in Thai and Lao cuisine (for dishes such as tom yum), and Cambodian cuisine (for the base paste "Krueng"). The leaves are used in Indonesian cuisine (especially Balinese cuisine and Javanese cuisine), for foods such as sayur asam, and are used along with Indonesian bay leaf for chicken and fish. They are also found in Malaysian and Burmese cuisines.

Kaffir Lime leaves are thought to promote gum health and freshen breath. In popular Thai folklore, this plant is known to cleanse the mind and the body and ward off evil spirits.