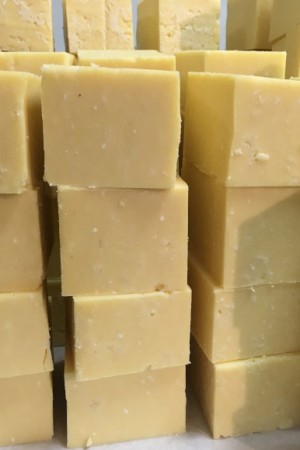 Aged Irish Cheddar is a pasteurized cow's milk cheese that is aged for over one year and undergoes a stringent grading process as it matures.

A distinctive rounded flavor and a natural hint of sweetness with elements of mature cheddar, sweet nutty tones of a Swiss and the piquant bite of aged Parmesan.

This sweet, granular cheese, aged over a year with only the best and tastiest cheese making it through, resulting in a gourmet Cheddar that is full-bodied with a rich and smooth finish.

Uniquely, Irish Cheddar is largely flavor neutral with wine and makes a great base to carry any other food that you want to show with the wine so use it with any wine.

Every once in a while, someone will ask John Lucey if he’s ever tried Irish cheddar because he’s Irish. What they don’t know is that the cheese, popular in Ireland and beyond, was created by Lucey himself.

It is indeed an Irish cheese, even if it comes from Cork and not Dublin. In 1990, Lucey was a Ph.D. student working at the National Dairy Products Research Centre in Ireland’s County Cork. He had to create unusual conditions for making cheese as it related to his research. He was looking for mineral content and texture, not flavor.

“When you make food products, you always like to taste them,” said Lucey. “As it aged, I’d take a piece of it and I’d think, ‘This isn’t bad, this is different.’ ” so he decided to see if he could recreate it. He recreated the conditions, made some more, let it age and got the same flavor. He asked more people to taste it, and all agreed that this was something different.

When Lucey got to the point where it was time to move on he thought he’d give his experiment a chance to find a suitor and invited representatives of the country’s cheese plants to taste. It could be a way for an Irish cheese company to diversify, and to do so without additional capital costs because his new cheese could be made using the same equipment as cheddar.

Carbery Milk Products agreed and three years later began to make the cheese. Lucey helped the company scale up and by 2012, over 40,000 tons of the cheese had been sold.

Irish Cheddar has a distinct flavor. It’s made of milk from grass-fed cows, with a texture that’s reminiscent of a Parmesan with the familiar crystals of an aged cheddar. It’s aged for at least a year, and is vegetarian.

Sourced from creameries all over the world many of our cheeses are from small family-owned, alpine farms and only produced in limited quantities or at one-time each year. We take most of their production which goes straight out to our club members.

Our cheeses are sold in an 8 ounce cut. When ordering more please use “quantity” in multiples of 8 ounces i.e., for one pound order a quantity of 2.

Because our cheese club members take precedence we may have limited inventory of some cheese products.

If you order a cheese that is unavailable our customer service team will contact you with delivery details or a substitute cheese product.

Your cheese selections are individually wrapped in sustainable, recyclable, low environmental impact food wrapping which will extend the life of the cheese in your refrigerator.

The cheese is then carefully packed in an insulated container with “cool” ice packs and sealed in its shipping box to be sent via overnight air arriving fresh and cool at your home or office.

We search the world for fresh, natural cheeses made from milk produced by family-owned, free grazing animals and crafted by artisan, quality-focused cheese makers. Each year we choose only the best cheeses to pair for our wine and cheese club members to enjoy.
$15  ·  Add To Cart