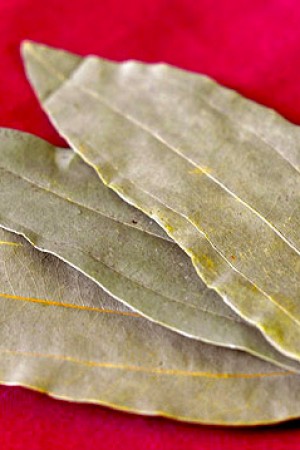 These are quite different to the European bay leaf (Laurus nobilis) and are actually leaves from a type of cinnamon tree.

The flavor is distinctly clove-like, slightly spicy and refreshing.

Indian bay leaves, cinnamon leaves, cassia leaves, or tejpat/tej patta in Hindi. Longer and wider than bay laurel leaves, they come from the same family but are less woodsy and piney in flavor and more akin to cinnamon and cloves.

In northern India, the leaves are used to perfume spice mixes, kormas, and Kashmiri curries. Try substituting them for bay laurel leaves in soups and sauces, the cinnamon aroma goes especially well with lentils and even tomato sauce.

Health Benefits: Bay leaves are thought to soothe the stomach, relieve flatulence, and help to heal ulcers. They are considered an excellent source of bone strengthening minerals, particularly copper, potassium, calcium, manganese, iron, selenium, zinc and magnesium. In addition to being a good source of antioxidant vitamins, bay leaves are a good source of B vitamins, which is important for proper metabolic and nervous system functioning.