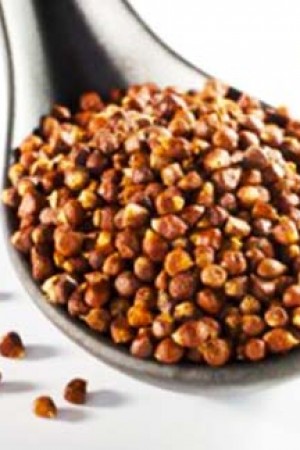 Grains of paradise are a spice worth a couple minutes' meditation. Smell a small handful and you'll be hit by an intense woody, almost forest-like aroma.

Then pop one in your mouth and bite down. There's an initial burst of inviting, peppery warmth, full but in no way harsh. Then a lifting note of citrus and something almost herby. In an instant the spice's woody character takes hold, and tree bark gives way to cloves, cinnamon, and the faintest hint of cardamom. And the finish? Some of the most pleasant, full-bodied heat you've had the pleasure to encounter. It lingers for a while, not as a tingle or a burn, but as an assertive, gentle flame.

Use in Moroccan and Tunisian dishes and whenever an exotic pepper taste is required.  What does it work well with? Since it has spicy, warming, and cooling flavors, pretty much anything. You can use it just like black pepper, ground during cooking to impregnate its flavor or tableside to get an embellishment of spice. Since it tastes like so many things, you can use it to both enhance and contrast the main flavors of a dish. How you pair it and when you add it also impact its final taste.

You can emphasize its citrus flavors by cracking some into salad dressings. Its slight herbiness is enhanced by herbs like thyme (lemon thyme if you can get it), rosemary, and sage. Curries and rich sauces are the beneficiaries of its sweet warmth, as are gingerbreads and spice cakes. In all of these there's that peppery heat, but it's so much less punchy than black peppers (though no less flavorful) that it's rarely unwelcome.

Every meat would benefit from its inclusion, be it in pure ground form, included in a sauce, or used in a spice rub. It's perfect on fish with lemon and adds intriguing flavors to shrimp and mussels. It does awesome things for roasted vegetables.

No matter what you use it on, use a dual-application approach: Add some while cooking and just before serving to preserve its full range of flavor. Few recipes call for grains of paradise as it's still largely an unknown ingredient, but after tasting it's easy to get a sense for how to use it. And since it's quite forgiving, there's few risks to trying it out.

Is it more pricey than most spices? Perhaps. But in a world of uncomfortably expensive vinegars and oils, where you can pay three dollars for a handcrafted soda, it's an affordable luxury that can do culinary wonders. And it's far less expensive than you think. The grains aren't that dense, so even a few ounces buys you a lot more than an equal weight of another spice. If you use some in a pot of lentils instead of the steaks you were planning to grill, it more than pays for itself. Think of it as an investment in your culinary potential.

Also known as Melegueta Pepper, a rare spice indigenous to the West Coast of Africa from Sierra Leone to Angola.

These seeds, which are closely related to cardamom, have a sharp peppery bite and refreshing astringency.

Today, this rare spice is being used in gourmet cuisine as a replacement to pepper, and is used in craft beers, including Samuel Adams Summer Ale, gins, and Norwegian akvavit.

In America, grains of paradise are starting to enjoy a resurgence in popularity due to their use by some well-known chefs. Alton Brown is a fan of its use, and he uses it in okra stew, and also his apple pie recipe on an episode of the TV cooking show Good Eats.

They are also used by people on certain diets, such as a raw food diet, because they are less irritating to digestion than black pepper.

Health Benefits: Grains of Paradise are seeds from a plant species that belongs to the ginger and cardamom family. Although there have been little clinical studies done on the health benefits of Grains of Paradise, they have been used for centuries as a stimulant, aphrodisiac, digestive aid, diuretic, a breath freshener, and to create warmth in the body and improve circulation. They are an excellent source of alkaline minerals.