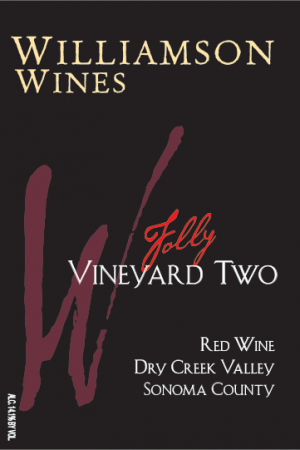 A Folly can be described as a "delightful foolishness in creating something symbolizing classical virtues in an unexpected way." How can this possibly be used to describe this - the first wine using grapes from our Vineyard Two?

Approaching the 2014 bottling we were left with three small lots of great wine left after blending with not enough of each to bottle as a standalone wine. It was foolish to attempt to create a beautiful, structured wine from the components we had at hand, even though they were all great wines on their own. Then we had the bright idea of adding a new wine from Estate Vineyard Two and voilà our folly blend (Mélange ) became a reality!

Thick, yet translucent in color revealing it as a red table wine of some breeding. Rich and velvety with aromas of blueberry, gingerbread and baking spices with a hint of thyme. In the mouth a slightly earthy and meaty essence resolves into hints of tarragon, cinnamon, nutmeg and cloves. The balance of this wine is awesome and the tannin, while noticeable, is well integrated within the wine’s overall mouth appeal.

Each wine was made standalone and aged in barrel for two to three years prior to blending. Only 336 cases were produced - a one-off wine unlikely to be repeated.

Creating the blend is the most creative part of being a winemaker. It’s when you exercise your skills at flavor balancing. Folly is largely a blend of velvety rich Merlot and earthy, mouth filling Mourvèdre. The Merlot generally showed fruit flavors of black cherry, raspberry and plum while the Mourvèdre showed blueberry, blackberry and plum. The Merlot is a Bordeaux while the Mourvèdre, a Rhone. The chance to blend these two does not come often and the potential of integrating the fruit spectrum was appealing.