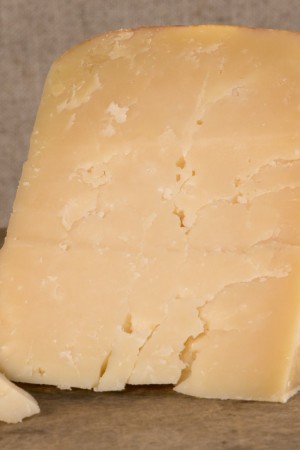 Ewephoria (pardon the pun) is a pasteurized sheep milk Gouda style cheese from the Friesland region in Holland.

Made in the same way as a traditional Gouda but using sheep's milk sourced from a family owned farm where the sheep are treated like family. The farmer's wife stated that the sheep "eat better than her children" on lush pasture surrounded by a nature preserve.

Unlike any other sheep milk cheese you have ever tasted before, this cheese tastes like candy, with notes of butterscotch and caramel. Through its aging, it develops a smooth, sweet and nutty flavor. It is unique and more welcoming than other aged Goudas making it a very enjoyable cheese to eat.

There are two types of Ewephoria that are classified based on how long it ages:

Enjoy the butterscotch sweet, nutty flavor with red or green grapes or try it shaved over beef or as stand-alone dessert. Delicious melted on pies or dessert breads.

Ewephoria is made from sheep's milk and is pasteurized. It is, however, made using the same carefully-guarded starter cultures using vegetable rennet, that gives Gouda such a distinctive flavor.