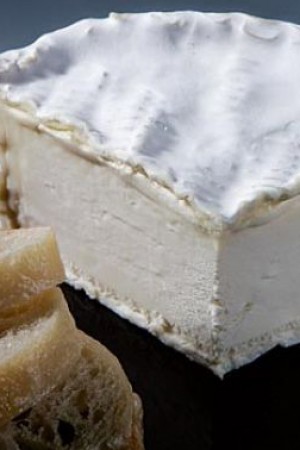 One of our cheese reviewers made the comment, “Domaine du Vallage  is a cheese you’d leave your boyfriend for . . .”

Made from pasteurized cow’s milk Domaine de Vallage is a triple cream soft ripened cheese that is densely creamy and smooth with a slightly salty, flavor ending in a sweet, buttery finish.

The French have long dominated the category of buttery soft, ultra-rich and gently sweet cheeses with legendary names such as Brillat-Savarin and Pierre Robert.   Really only known in the French region of Chevillon this triple cream cheese, Domaine de Vallage, is a brother of the famous Burgundian Brillat-Savarin.

The bloomy rind should be trimmed away or cut off the top so you can scoop out the cheese.  The simplest way to serve triple-cream cheese is smeared across a slice of baguette or spread the cheese on toasted croutons, accompanied by Williamson Amourette Chardonnay.  It’s also amazing melted on steak instead of butter or blue cheese, accompanied by a Williamson Cabernet Sauvignon.

Because they are younger than 60 days when sold, American triple-creams must, by law, be made from pasteurized milk. While the French may use unpasteurized milk for domestic consumption, they must pasteurize milk for triple-creams sold in the United States, which is one reason why that French triple-cream you had in Paris tastes a little different from the one you had here in Healdsburg.

Triple-creams are delicious and very wine friendly, normally ripening in two weeks.   French triple creams are normally six weeks old.   For the first two weeks, the cheese will be firm. By the seventh week, you will enjoy it in a totally molten state.

Once cut, if you intend to store the cheese, do not use plastic wrap as this cheese needs to breathe.  If you detect a slight ammoniated smell, let the cheese sit unwrapped in the refrigerator cheese shelf for about 30 minutes, though some people like a touch of ammonia in their cheese to show that “barnyard” quality.