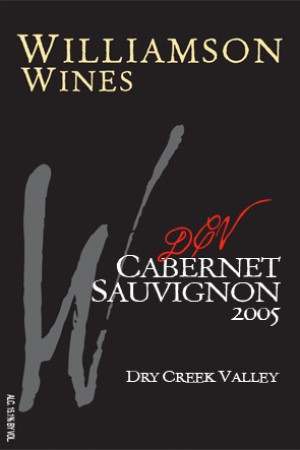 Naturally it will work with most steak combinations, as long as there is not too much pepper but try it with brown gravy, perhaps with roasted chicken or veal cutlets or even Chicken Cordon Bleu.

This Gold Medal winning wine has rich and deep fruit on the nose, presented in a svelte, pure, dark fashion, along with a layer of creamy French oak.

The palate has a similarly pure character, with a silky composition and an elegant style. Pure fruit, with rising tannins in the midpalate, this wine is structured but with its own deep character. The tannins are exquisitely integrated and there is a great harmony throughout.

This is the chameleon wine, silky smooth but when paired with strong food like blue cheese it will show its Cabernet dominance immediately in such a stunning way thus lending itself to food experimentation.

No allergens were used in the making of this wine.

Winter rains gave way to a dry, mild March in 2005 then began again with record-setting precipitation late into the growing season delaying bloom and set. The summer months were cool and pleasant with few heat spikes. Fog and cool temperatures were a concern heading into September as sugar levels were yet to rise in all varieties. Warm, nearly perfect conditions arrived with an Indian Summer making for a later than average harvest, providing fruit with extended hang and ultimately realizing excellent sugar development and balanced acids with a larger than average crop of what could be signature vintages from Sonoma and Napa Valley.