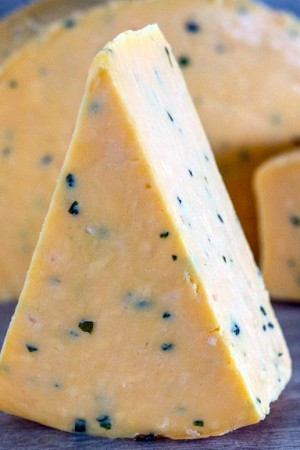 English Cotswold cheese, a variation of "Double Gloucester", was originally made from the rich milk of the black cattle of Gloucester and traditionally made in the Cotswolds.

English Cotswold is a mix of chopped chives and onion, coupled with a quality Double Gloucester cheese.

This smooth, cheddary delight comes from the Clawson dairy and is a modern rendition of an old British favorite which lacked the vegetable ingredients.

The cheese is aged for just three to four months so it’s milder, less sharp and less firm than a well-aged cheddar.

Like cheddar, it melts well and is often served melted on slices of bread. It is golden yellow to orange in color.

Like most hard cheeses, this cheese can be stored for at least a month in the refrigerator so you needn't be in a hurry to finish it off, though we suspect you just might after you taste it.

The harmonious blend of mellow cheese and powerful vegetables makes Cotswold a terrific complement to the softer, milder flavors on your cheese board.

Cotswold cheese is named for a picturesque area of Britain – the Cotswolds are primarily located in the counties of Gloucestershire and Oxfordshire, but extend into sections of Wiltshire, Somerset, Worcestershire and Warwickshire.

In 1966, an area of approximately 790 square miles of the Cotswolds region was designated as an “Area of Outstanding Natural Beauty” to conserve and enhance the natural beauty of the region.