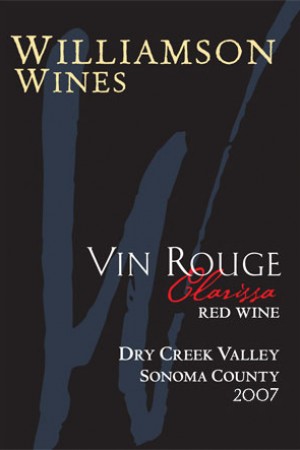 DOUBLE GOLD MEDAL WINNER at the 2011 SF Chronicle Wine Competition and GOLD MEDAL winner in the Sonoma County Harvest Fair Wine Competition this Meritage wine is in the style of Château Haut-Brion with exotic cherry and plum character, a bright finish and great length.

There is aromatic purity and depth here, expressive of our estate fruit which in this case is Cabernet Franc, Merlot and Cabernet Sauvignon.

On the palate the wine has rich substance and while rather soft and caressing, it shows wonderful character, freshness and acidity. It has a very bright finish, and great length.

Pair with foods such as hamburger, steak, dense white fish and white meats, like chicken or pork. Delicious with olives and other Mediterranean flavors!

The expected nice ruby color introduces the concentrated aroma with nice ripe black fruit and crème de cassis aromas, as well as hints of chocolate, violet, and liquorice. The oak is well-integrated with nuances of toasted almonds. Perfectly defined tertiary aromas have appeared over time including a little truffle, forest floor, and fruit in brandy but the wine still remains very fresh.

It starts out very flavorfull and velvety on the palate, with plenty of fruit and a hint of cedar. This smooth, silky Clarissa opens up quickly and is proving to be charming and delicious. It provides a great deal of pleasure and has reached its peak, epitomizing the synergy between concentrated, but well-balanced Merlot, and elegant, aromatic Cabernet Franc.

This 2007 year of contrasts began dry with some very cold days and single-digit night temperatures and continued dry, with about 60% of normal precipitation. Temperatures were warmer than normal as winter continued into spring with resulting earlier budding, bloom and set in the vineyards.
The summer growing season continued on the mild to cool side, with fewer days in the 90s, and harvest followed a traditional, even relaxed, pace. There was a brief period of heat that spiked around Labor Day, but the temperatures cooled after several days. This heat spike added the boost of sugar development we were looking for to complement the excellent acid structure developed in the white varieties.
Clusters, as well as individual berries on the clusters, though set at a normal quantity, were notably smaller in all varieties due to the dry season. In September the region saw a couple of periods of brief precipitation. Nearly all white varieties were already picked and the thicker-skinned black varieties like Cabernet and Merlot were unaffected by the rain.
The valley floor crop, including most of the black varieties, was almost fully harvested when unseasonably cool and wet weather arrived the second week in October. The higher elevation vineyards still had anywhere from 25-50% of their crop on the vine, but while the rain was just enough to penetrate several inches into the soil, not enough to get to the root zone of most vineyards. Indian Summer returned with warm, clear days and vineyard crews sprang into action to finish harvest for what appears to be a vintage of exceptional quality.