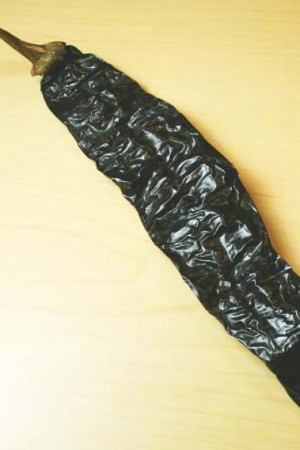 The pasilla chili is a dried chilaca chili with a herby aroma and licorice-like notes. Traditionally used in making the famous ‘mole’ sauce.

Pasilla (pah-SEE-yah) refers to the dried form of the long and narrow chilaca pepper.

Warning: In the United States producers often incorrectly use pasilla to describe the poblano, a different, wider variety of pepper whose dried form is called an ancho Both ancho (dried poblano) and pasilla (dried chilaca) are from the species capsicum annuum, but they are different varieties, not just shapes. Ancho is a little more reddish in color, pasilla more brown/black. They are similar in terms of heat (both mild), but ancho is perhaps slightly sweeter. Ancho chiles are certainly more common and widely used in the United States, but pasilla is used for authentic mole sauce. Most people would never know the difference, which is why marketers get away with the mislabelling of ancho chiles as pasilla.

There are literally hundreds of different chilies, all of which descend from the original ones discovered by the Spanish when they found the Americas.

Prior to this chilies were unknown to the rest of the world.

The warming bite and delicious capsicum taste of chili was warmly embraced by nearly every nation on earth, thus we find some form of capsicum or chili in nearly every cuisine.

Dried chilies have a very different flavor to fresh ones, as upon drying a caramelization of the sugars takes place which creates a delicious, robust taste not found in fresh chilies, in the same way a sun-dried tomato has a more complex flavor profile than a fresh one.

Health Benefits: All Chili peppers contain capsaicin. The amount of capsaicin is relative to the heat of the Chili pepper. The more pronounced the heat, the more capsaicin. Pasilla chilies have low heat. Capsaicin is considered highly anti-inflammatory and may benefit those suffering from inflammatory disorders, such as arthritis osteoarthritis, psoriasis, shingles and diabetic neuropathy. Capsaicin is also commonly considered a beneficial adjunct to a healthy lifestyle in cardiovascular function, increasing circulation, as well as an appetite suppressant and metabolism booster. Peppers also contain free-radical fighting properties, which may help to maintain a youthful complexion, and prevent cellular damage that can lead to disease. Chilies are also an excellent source of antioxidants Vitamins: A and C, as well as Vitamin K.