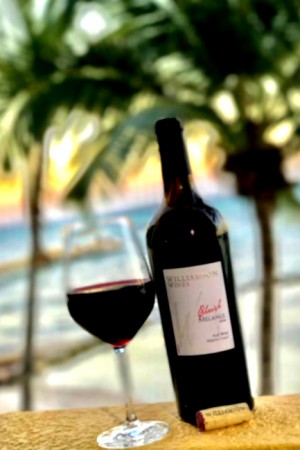 The balance is critical between the Merlot, bringing suppleness, roundness and exceptional length and the Cabernet Franc which cherishes the nose with ripe red fruit delivering a wonderful first impression.

The beautiful light ruby-red color is deep and intense. The first impression on the nose is of ripe red fruit (cherry, and blackcurrant), giving way to fresh, aromatic hints of rose petals and violet. A chocolate nuance appears with aeration.

The wine is straightforward and fresh on the palate approach. The mid-palate offers good intensity, with no aggressiveness, revealing blackcurrant and raspberry flavors accompanied by notes of freshly cut flowers such as rose and violet. The finish is pleasantly full with nicely firm tannin.

Only 146 cases produced. Our vineyards are farmed to the code of sustainable agriculture using traditional techniques, based on strict control of yields, manual harvests and numerous quality specific tasks that are carried out by hand throughout the year.