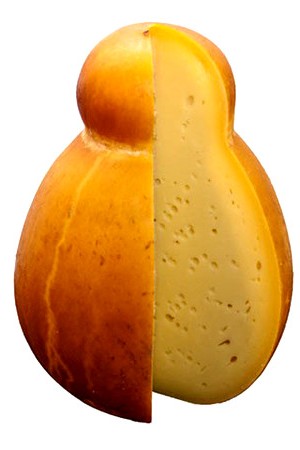 Caciocavallo is one of the most traditional cheeses found throughout Southern Italy.

Caciocavallo is "pasta filata," a family of cheese which includes Mozzarella, Burrata, and Provolone and refers to the process by which curds are submerged in warm whey or water until they become pliant. They are then stretched and folded around themselves to create the final form. This version, from Puglia, is smoked over natural wood fires.

Caciocavallo is perhaps the oldest existing pasta filata or drawn curd cheese. Its origins are lost in time but it was mentioned as early as the first century by the Roman writer Columella and may well go back even beyond the Romans.

One theory as to the origin of its name has it that its name derives from “horseback cheese”, and that horsemen at one time suspended it from either side of their saddles in pouches made of leather or cloth, strung together by a rope but this is only one of many explanations.

The cheese is reminiscent of cheeses from the Caucasus- Balkan countries such as Romania, Yugoslavia and Turkey, and Central Asia where the cheese is aged in sheep’s skin or goatskin bags.

The slightly elastic consistency of this cheese is obtained by a process similar to that of Mozzarella. The curd is placed in whey and heated to 45° C, then cut into thin strips and plunged into hot water and whey again. It is then hand kneaded, put once more into a hot water bath.

After it has been shaped it is cooled by immersion in water, this last being the only part of the process that differs from Mozzarella. The cheese is shaped like a gourd or pear and a hemp loop fastened around the pointed end so that the cheese can be hung up to mature for a period of three months under dry conditions and up to three years.