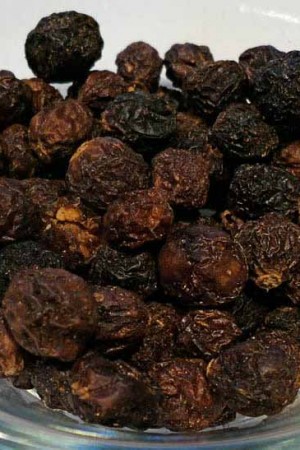 These Australian native berries are pale tan to dark brown and have a fruity, caramel-like flavour and slightly tangy acidity. Bush tomato flavours stews and casseroles while the akudjura powder blends well with coriander seed and wattleseed to flavour meats from chicken and beef to full-flavoured fish such as salmon and tuna.

Other Common Names: Akudjura (when ground to a powder), Dessert Raisin, Akatyerre.

If there’s a brave new frontier in the spice trade, it’s most certainly in Australia. Wild-crafted spices like bush tomato, akudjura and mountain pepper are the newest things to hit spice shelves in years. Interesting that Aboriginal peoples’ spice racks may predate those of the rest of the world by millennia.

Entrepreneurs in the spice trade discovered the potent bush tomato Down Under while investigating the Aboriginal diet. With a taste that starts as sun-dried tomato but ends sharper and less sweet, the bush tomato was historically seen as a staple, not a specialty spice, by the indigenous population.

Some samples can even taste like caramelized sugar or dried fruit, but the finish typically brings it back to the savory end of the spectrum. Native to Central and Western Australia, the bush tomato has a strong connection with the mythology of the Warlpiri tribes and Anmatyerr people of Central Australia.

Like many Australian native plants, bush tomatoes thrive after bushfires, the initial prolific fruiting steadily declining over a few years until rejuvenated by the next bushfire.

Regarded as a staple, bush tomatoes that had dried on the shrub in low humidity desert conditions were gathered and ground with water to produce a thick paste which was formed into large balls and left to dry in the blazing sun.

The high acidity characterized in the tangy flavor and rich vitamin C content acted as a preservative, making storage over long periods of time possible and these balls were often wedged into the forks of trees for later use.

Although the Australian Aborigines used bush tomatoes primarily for sustenance, our current inquisitiveness and desire for diversified taste experiences has led us to appreciate bush tomatoes as a spice, used in small quantities to enhance the flavor of a wide range of foods in everyday meals.

The bush tomato shrub, a relative to the potato and tomato, is a hardy looking perennial with woody stems bearing long sharp spikes at 2_314 in. (5-8 cm) intervals. Soft, down-covered, grayish-green leaves and young rust-colored leaves set off attractive violet flowers in the shape of a five-pointed star.

The fruits are around 3/4 in. (2 cm) in diameter, purplish-green when young and paleyellow when ripe. As the sticky fruits dry, they shrink to 1/3 – 1/2 in. (11.5 cm), the color darkens to chocolate-brown and a chewy, raisin-like consistency develops.

Bush tomatoes ripen in the wild in the central desert and the fruits are allowed to dry naturally on the plant before gathering. This process is essential if they are to be safely eaten with no harmful side-effects because during the drying process the level of alkaloids is reduced.

Dehydration also concentrates the flavors in bush tomatoes and creates more full-bodied and complex flavor notes in the same way as drying in the sun modifies the flavors of many familiar spices from around the world.

The flavor is initially caramel-like, yet after about 30 seconds develops a somewhat bitter, lingering aftertaste which leaves the palate unexpectedly refreshed, similar to green tomatoes.

Ground bush tomatoes are referred to as akudjura, the color varying from light, sandy orange-brown to dark brown depending upon the amount of rainfall the plants experienced while the fruits were developing.