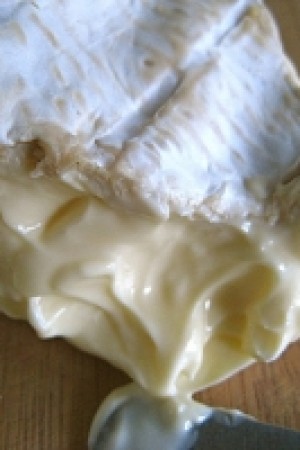 A cow's milk, triple-crème brie-style cheese from France. This lovely cheese is buttery, rich, creamy and deliciously decadent with a rare "natural rind" which is essentially a thin skin. Pairs with 2009 Chardonnay Amoureux.

This cheese was created in 1930's by Henri Androuet and was named after the renowned 18 century French food writer Brillat-Savarin.

It is a soft-white cheese of round shape with a thick, velvety, white crust.

Developed in the 1930s and named for an eminent French gastronome and cheese enthusiast, Brillat-Savarin today is produced by several large dairies in northern France.

The process begins with pasteurized cow's milk enriched with enough creme fraiche to produce a finished cheese with a minimum fat content of 72 percent, a feat that milk alone can't achieve. (That's the percentage of fat in the dry matter; the fat percentage by total weight in this high-moisture cheese is closer to 30 percent.)

Once the fresh wheels are firm enough to be turned out of their forms, they are sprayed with the mold spores that will, in a matter of days, produce a velvety white rind. These same molds help mature the interior, transforming it from a firm and chalky paste to a soft, fluffy spread.

Shipped at two to three weeks of age, Brillat-Savarin has a short life in most retail cheese cases, where it lacks the humidity it needs to age more slowly. If over-matured or not properly handled, Brillat-Savarin may look shrunken or desiccated and its pristine bloomy rind will be heavily mottled.