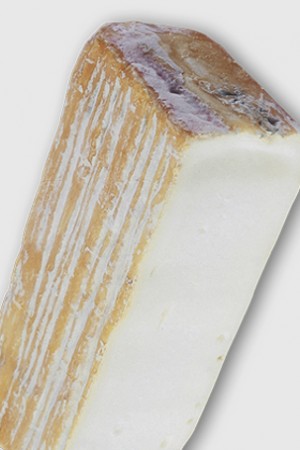 Brescianella is an uncooked, pressed, pasteurized cow’s milk cheese with a washed rind, aged around 90 days, on straw mats that leave the rind scored with distinctive deep lines. Similar in appearance and flavor to Taleggio, and like that cheese, comes from the Lombardy region, the town of Brescia specifically, for which it’s named. “Stagionata” means “aged”, so it’s essentially the “Aged Cheese of Brescia”.

Ivory-colored and lightly eyed, the paste is creamy and soft in texture, mild in flavor, milky, slightly tangy and pleasantly sour, with nutty, meaty and grassy notes. The rind’s surface is scored and lightly sticky to the touch. The rind has a somewhat harsh, wet straw odor which has the potential to deter eaters but this cheese is so delicious that once tasted it is difficult to stop eating.

Brescianella Stagionata’s flavors are varied. The interior paste has a springy texture and smells like cooked cabbage, grass and roasted nuts and light salt flavors. Its texture is smooth and very creamy. There is a light sour after-taste that is enticing and encourages further eating.

This cheese is best shared with family or close friends at an outdoor meal so they are not likely to be deterred by the cheese’s initial odor. The after-taste does not linger long in the mouth, but the odor clings to the fingers long after eating so wash it down with a glass of our Relish Roussanne.