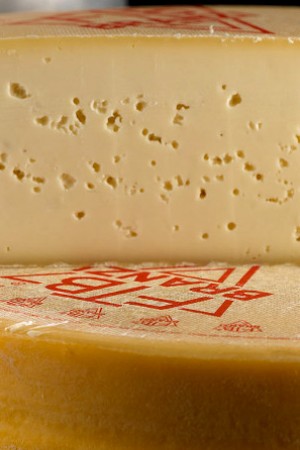 Branzi cheese, also referred to as Mountain Banzi cheese, is produced in the mountainous region of Valtaleggio (Lombardy) Italy.

Originally a summer cheese, Branzi is now produced all year round only in the region of Bergamo. It is named after the town, Branzi, situated in Valle Brembana, in the foothills of the Alps where the Bruna cows are fed mostly on local grass and hay.

Branzi is the only cheese made in Valtaleggio with raw cow’s milk then aged for several months, developing a texture that contains numerous small holes surrounded by a semi-firm paste which becomes firmer as it matures.

This cheese has a yellowish thin and smooth rind. The texture is compact with just a few bird’s eye holes. Its straw color becomes more golden with ageing. Dry and mild, the taste tends to get stronger and slightly piquant in the ripest wheels. Aging varies from 60 days to 6 months.

Branzi melts easily and provides a mild and nutty flavor used in toasted sandwiches, pizza topping or any other baked goods.