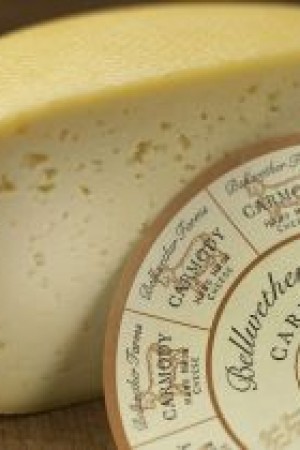 A Bellwether original! Made from Jersey cow milk and aged at least 6 weeks.

Naturally golden in color with a smooth texture and wonderful flavor.

Carmody was inspired by a trip to Italy, watching Gorgonzola being made near Milan. Many Gorgonzola makers are secretive and limit access to their cheese making but Cindy was able to get inside the ripening room where she saw some of the early stages of Gorgonzola aging. In one of the rooms there were some small wheels of cheese on an out of the way shelf which when tried was found to be a very mild but creamy cheese that still had a great deal of fresh milk flavor.

Cindy began to notice similar table cheeses marketed throughout Italy under a variety of names but meant for local consumption. It seemed that a cheese of this type might appeal to customers in the US as an alternative to the young Cheddars or Jack cheeses that dominated the market.

Using the pecorino recipe as a starting point and making changes in response to the flavors and texture of the cheese, eventually Carmody was created.

Meant to highlight the buttery flavors of Jersey milk and named Carmody after the road that runs adjacent to the farm.