Asiago with Rosemary and Olive Oil

Rosemary & Olive Oil Asiago is an Italian inspired farmstead cheese made from pasteurized cow's milk, which has been hand-rubbed with rosemary and Italian olive oil.

The history of Asiago cheese is almost as ancient as the history of the town of Asiago in Italy’s Veneto region. That takes us back about a thousand years. Until about the 16th century, Asiago cheese was made with sheep’s milk, but gradually switched to cow’s milk, which is what we use to make this Asiago with Rosemary & Olive Oil.

This cheese is made using farm-fresh milk that’s collected from farms within miles of the cheesemaking facility. The curds are hooped (placed into the forms that give the cheese its shape) by hand and are individually rotated and tested for “doneness” over a six month period.

During this time, each wheel of cheese is hand-rubbed with a blend of rosemary & olive oil to create a savory flavor profile that accentuates the rich nuttiness of the cheese. 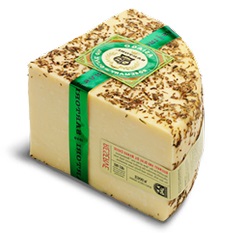