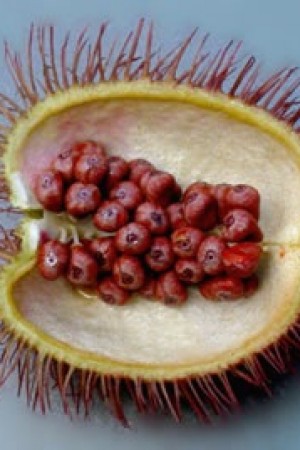 Annatto seeds are small, indented, pyramid-shaped seeds with a powdery, red-oxide-like covering. The flavor is mild, somewhat peppery and earthy.

The popularity of natural colors in processed foods has made annatto a common ingredient, replacing many of the artificial colors that some people are allergic to.

Annatto seed contains beta-carotene and vitamin C, which are both potent antioxidants that help to prevent free-radical damage to the cells and DNA. The seeds are thought to have diuretic, antibacterial and astringent properties, and may additionally ease digestive discomforts, including indigestion, flatulence, nausea, and constipation.

A natural food additive that blocks skin cancer cells and is so much better than sunscreen.

It would appear that Annatto - which was used by ancient tribes as body paint, contains a compound that prevents the formation of cancer cells caused by ultraviolet radiation.

The compound in question is called bixin, and it was discovered as part of tests looking for molecules to activate the body's Nrf2 pathway, which helps strengthen human cells against exposure to carcinogens.

The discovery was made by a team from the University of Arizona College of Pharmacy where laboratory tests on mice showed much less of a reaction to UV radiation than mice that weren't given Annatto, supporting theory that the compound blocks skin cancer cells by inducing cells to produce protective antioxidants and repair factors.

In effect, cancerous cells are prevented from forming in the first place, rather than coming under attack once they exist. "If you suppress sunburn, you can prevent the formation of cancer. That's the rationale," researchers told the press.

Considering that Annatto is already approved by the US Food and Drug Administration (FDA) as safe for human consumption, it means there may be fewer regulatory hurdles and ultimately, Annatto could prove a key ingredient of a new super-sunscreen, but one that works from the inside out, rather than being smeared over the skin.

The research has been published in the journal: Free Radical Biology and Medicine.