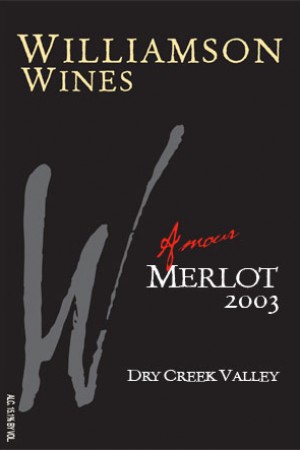 With a perfect ruby color this wine is a melding of noble character with fine elegance and great style.

As expected it has a ruby-red color. The nose is quite expressive, with elegant floral notes and hints of quality tobacco. The bouquet goes on to reveal aromas of ripe fruit such as cherry and redcurrant. The oak has integrated beautifully. The wine starts out smooth on the palate. The tannin is soft and silky, and the overall structure velvety and rich. For a Merlot it has plenty of body as well as a fine balance between freshness and soft fruit flavors which last through the end of the beautiful aromatic aftertaste.

The unpredictable nature of the 2003 growing season began with a series of early heat spikes in March, followed by the wettest April on record. A long cool summer allowed the fruit flavors to evolve beautifully ahead of the sugar accumulation. Heat spikes in September helped move the harvest forward after many felt it would be a late year.