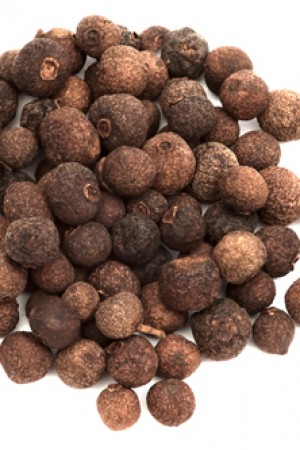 Allspice dark brown berries are the dried, unripe fruits of a tropical evergreen tree native to Jamaica. The common name allspice is given because the flavor is like a mixture of cinnamon, nutmeg and cloves.

It is preferable to buy allspice in the whole berry form, as once the berries are harvested they do tend to lose their flavor and aroma quite quickly. You can grind the berries as you need them by placing them into a pepper mill or coffee grinder or by using a mortar and pestle.

For a flavorful peppercorn mixture for your peppermill, add whole Allspice berries in equal proportions to green, black, and white peppercorns.

To further intensify the flavor and aroma of whole Allspice berries, place them on a cookie sheet and roast in a 350-degree F. oven until they begin to smell, about 10 minutes.

Achieve the same effect by using a heavy dry frypan on the stove-top, shaking often over medium-high heat for about 5 minutes. Watch carefully so they do not burn and become bitter.

When added to foods that are difficult to digest, such as proteins and fats or foods that may cause bloating and flatulence, such as cauliflower, cabbage and beans, allspice can aid digestion and relieve any discomfort that is associated with indigestion.

Allspice has proven beneficial in the treatment of arthritic and rheumatic pains and other muscular and joint problems. This is because it acts as a rubefacient, which is a substance that when applied to an affected area draws out the inflammation and increases the blood supply to it, giving a warming and calming effect.

Allspice is also known to settle the nervous system, which can be helpful for stress and anxiety as well as other symptoms.