Few varieties on earth are as recognizable as Cabernet Franc with its fine texture, its mid-level depth and pungency but only a handful are bottled as a single-vineyard, single-varietal as we have done with Sultry.

Originally planned to use in our classic Bordeaux blends Sultry is subtle and fascinating. This heady, seductive wine obviously deserved to be bottled as a single varietal and is a great addition to our Icon Wine portfolio.

On its own Sultry is a wine with a powerful linear flavor profile but with a tender side too. Anyone who loves Cabernet Franc or a beautiful bouquet will treasure this wine.

With lower tannin levels and more distinct blueberry, raspberry and plum flavor, seductive nose and pleasingly crisp in the mouth with a nice, medium length finish, Sultry deserves to be paired with a soft, but slightly complex food. Here's a few suggestions:

Sultry shows aromas of roasted red pepper, raspberry sauce and jalapeño. On the palate moderately high acidity and moderately low tannin with flavors of sour cherry, smoky tomato, dried oregano and sweet pepper. The taste will burst through your palate and drop out quickly with a subtle tingle from the acidity.

This higher acidity makes it possible to pair with tomato-based dishes, vinegar-based sauces or rich vegetables. The major lesson with Cabernet Franc, it is to match it with fresh, volatile herbs in your dish.


Cheese Pairing ~ Sultry Cabernet Franc The slight tannins in Sultry seem to make cheese feel creamier; red fruit flavors play up the sweetness of the milk making it more than any match with white wines. Here's a few suggestions:

Common belief is that goat cheese is best paired with white wines but Sultry pulls out that earthy character while the cheese seems to make the wine feel brighter and fresher. It’s kinetic and delicious.

Originally planted in our Estate vineyards to blend into our Bordeaux program the Cabernet Franc quickly showed that it deserved its own label. Bill described the nose as sultry and the name was confirmed by others who have come to love this wine.

Its unique personality has resulted in a strong group of followers and so the wine will remain in our lineup for the long term. In recent times we have brought a new Cabernet Franc vineyard on line but this wine is destined to always be in short supply.

Romantic Name ~ Sultry Cabernet Franc Sultry - passionately warm and exciting strong sensual desire, was the word that occurred when Bill first smelled the Cabernet Franc. Known for its great aroma this wine is truly sensual and sultry in nature.

The name Franc may well refer to the Frankish people who established the most powerful Christian kingdom of early medieval western Europe. Cabernet Franc has other names like Bouchet most commonly used in Bordeaux which around the same time was occupied by the Basque people.

ROMANTIC NAME “™” TRADEMARK NOTICE - The Romantic name used in conjunction with this wine has been used originally and exclusively by WILLIAMSON WINES, LLC as a trademark to distinguish their so marked wine products from those of other companies. WILLIAMSON WINES, LLC is the sole owner of this mark and any unauthorized use is an infringement of copyrights, trademarks and proprietary rights. 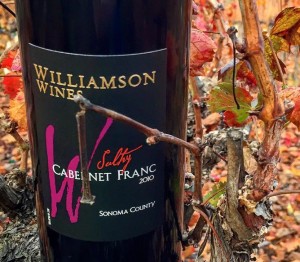 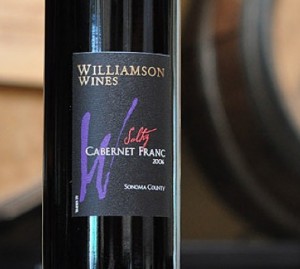