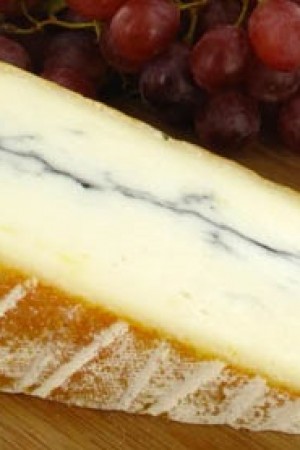 A very delicious twist on a famed classic that pairs sublimely with our Chantilly Chardonnay.

Crafted in the style of a cow’s milk Morbier with the traditional ash line running through the center, this is actually a goat’s milk cheese.

The rind is orange, sticky and slightly grainy. It is actually a far milder cheese than one might expect from a washed rind goat cheese with a creamy, earthy, lightly tangy paste with hints of mushroom and hay.

In the Pays de la Loire on the Atlantic coast of France a cheesemaker created a goat’s milk cheese that looked almost exactly like Morbier, except more white in color. He took it to Affineur Rodolphe le Meunier in the Loire Valley to age. The cheesemaker wanted to call it Goat’s Milk Morbier but knowing that the French are food purists, Meunier advised him to name it after the tiny river nearby, Le Jeune Autize.

Jeune Autize is a goat's milk rendition of traditional Morbier recognizable by its central ripple of ash which helps the center of a cheese ripen by altering its pH level. With a washed rind made in small batches by a single farmer it is earthy and pungent, with a dense, supple texture and mild, buttery flavor with hints of goat's milk and lemon.

Le Meunier takes Jeune Autize from its maker when it is about 2 weeks old, brings the young cheese to his facility in Tours and nurtures it to maturity. The 12-pound wheels take two to four months to develop the texture and aroma that Le Meunier seeks. During that time, the wheels are washed with brine and annatto, an edible plant dye that gives the exterior a golden hue. Le Meunier is a masterful affineur whose cheeses have been trickling into the United States over the past couple of years. Under his care, Jeune Autize becomes a cheese to treasure.

The thin rind is a little damp from the brine wash, but not too strong or salty to enjoy. The semisoft ivory paste displays that signature ribbon of blue-gray ash, more spidery and vein-like than the ruler-straight layer in most Morbier.

The aroma is subtle but seductive, a gently nutty scent with a hint of mushroom. The flavor is sweet, the salt appropriate and the acidity sufficient to keep this dense and creamy cheese from being cloying so it doesn't cling to your palate.