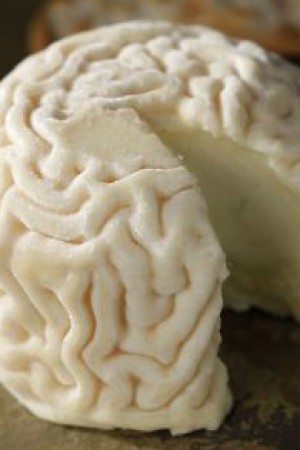 Coupole is a cheese of pure delight. This cheese has it all: great flavor, lovely texture, and visual beauty.

Coupole is a soft, aged goat cheese produced in Vermont. It is produced with pasteurized goat’s milk in a small dome format. The cheese is matured for 45 days before release.

Coupole looks like a wrinkled snow ball. It has a deeply wrinkled rind similar to Langres. Coupole’s rind has a sunny tint and is velvety to the touch. The milk-white interior paste is dense but not chalky. Just beneath its rind, Coupole has a silky translucent layer of paste that looks like buttercream icing.

Coupole has a pleasant goaty aroma. Its rind smells musty with hints of beeswax and daisies. The interior paste has a more defined honey-like scent.

Coupole is a full-flavored goat cheese with sweet and sour contrast. The denser core of the cheese has a light honey flavor. The translucent paste is sour, but more milky sour than citrus sour. Coupole’s texture is thick, pasty, and buttery. Coupole leaves a mild aftertaste.

Coupole’s allure is attributable to the intriguing contrast between the strong ripened flavor of the rind and the delicate fresh taste of its interior. Coupole’s sweetness suggests dessert, becoming creamier when out of refrigeration and should be a top consideration for a cheese plate. The wrinkled coral-like appearance makes for an impressive centerpiece on any cheeseboard or simply melt on top of a perfectly grilled steak.