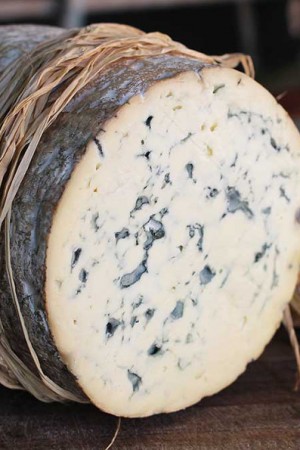 Milk for production is sourced from local herds of cows. During the winter months they remain on the lower mountain pastures but are moved to the higher meadows during the summer months, where they take advantage of the array of summer grasses, herbs and flowers.

Blu del Moncenisio is is an unpressed cheese which accounts for its high moisture content and creamy mouthfeel. Post production, wheels are dry salted before being transferred to maturing rooms where they are aged for 90 to 120 days.

In appearance, wheels of Blu del Moncenisio are drum shaped with a natural, slightly orange, sticky rind. Internally, cheeses are shot through with pockets of blue (as opposed to veins) that are surrounded by an ivory-cream colored paste.

This blue is dense and moist with a spicy finish. Flavors range from fairly mild to assertive depending on age and season. There are notes of wood, straw and nuts, underpinned by marked vegetal flavors with a balanced constant blue presence.

This is a great dessert cheese, served with Seduce Cabernet Sauvignon. Blu del Moncenisio is also fantastic complemented with a spicy chutney so Elate Grange Cuvee or Enchant Trinity would work well in that instance.